The Department of Agriculture-Philippine Rural Development Project (DA-PRDP) officially turned over the 3.6 kilometer Kepeng-Ungus Matata Farm to Market Road to the Municipality of Tandubas last February 20, 2020. The ceremony was headed by Mayor Hadja Rahiema A. Salih and Vice Mayor Fatima Saida A. Maing together with the municipal officials and project beneficiaries. This … read more »

The Department of Agriculture-Philippine Rural Development Project (DA-PRDP) in Caraga started the year right as it hosted the Mindanao-wide Stakeholders Consultation for Abaca in Butuan City last January 23, 2020. The consultation was participated by around 70 abaca stakeholders in Mindanao. Among these participants were competent authorities like the Philippine Fiber Development Authority (PhilFIDA), Department … read more »

With all the member- agencies present, the Regional Project Advisory Board (RPAB) chaired by Regional Executive Director Narciso A. Edillo in its 25th Business Meeting approved for endorsement to the Project Support Office (PSO) an enterprise and a farm-to-market road (FMR). “These subprojects aim to uplift the lives of farmers in rural areas. With the … read more »

Ambaguio, Nueva Vizcaya – For Engineer Norman Romero, the spirit to keep going in the sense of odds in the mountainside is very inspiring. He has seen an easier task, not this faced by the Municipal Project Management and Implementing Unit (MPMIU) of Ambaguio. They have worked overtime with the engineers and saw to it … read more » 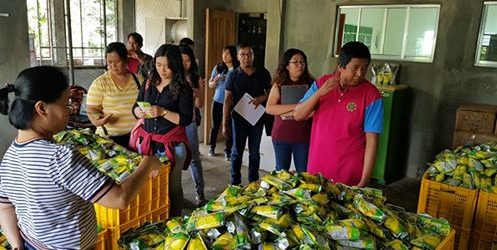 NAGA CITY, CAMARINES SUR – The Philippine Rural Development Project (PRDP) enterprise development (I-REAP) component will conduct an enterprise assessment to completed I-REAP subprojects (SPs) as an exit strategy as it is now approaching to its end. The activity aims to identify key areas that need technical assistance and support services as the Project disengages … read more »

In a span of eight months of construction, three barangays are now enjoying the 9.66-kilometer concreted farm-to-market road in Brgy. Concepcion to Brgy. Hampangan in Hilongos, Leyte, after years of enduring the difficulty in transporting their farm products. This was lauded as the first ever outstanding project all over the country under the Department of … read more »