The Bolusao Fisherfolks Multipurpose Association in Lawaan, Eastern Samar harvests an estimate of 330 kilos of milk fish as products of the technology demonstration project of the Department of Agriculture through the Philippine Rural Development Project-Global Environment Facility (PRDP-GEF). This is a double gain from the previous 105 kilos they harvested during the first tranche.

“We woke up excited today to harvest the second round of fingerlings after our first harvest two years ago,” said Efren Minguel, Bolusao Fisherfolks Multipurpose Association (BFMPA) President after being asked about the latest development on their fishery project.

The BFMPA from Lawaan, Eastern Samar, successfully harvested an estimate of 330 kilos of milk fish, locally known as bangus as  products of the technology demonstration project of the Department of Agriculture through the Philippine Rural Development Project-Global Environment Facility (PRDP-GEF). This is a double gain from the previous 105 kilos they harvested during the first tranche.

“We only had a partial harvest for today based on the number of kilos of our existing orders from the differentpublic markets in Eastern Samar. We still have more, which we have yet to finalize as to when are we going totake all of the remaining fishes,” said Minguel. 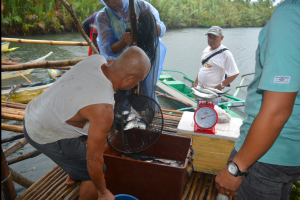 The Philippine Rural Development Project- Global Environment Facility provided the association the inputs which included fingerlings, feeds, and materials in building their sanctuary.

During the first tranche in August 2017, the PRDP-GEF provided them the inputs which included fingerlings, feeds, and materials in building their sanctuary. A total of 5,300 fingerlings were given to them and was sold out last December 2017, amounting to Php 37,000.00.

“We rolled the money we earned from the first tranche and bought fingerlings which we grew for the past four months. Now, we expect a total of 1.3 tons or approximately 1,000 kilos in the second tranche,” Minguel added.

He added that the money they earned from selling bangus is a big help to their families. “Aside from the income sales, we share some of our harvest by equally dividing them to each of our members for our own consumption. By this, we can save from buying food for our daily meal requirements.”

“This association showed commitment in the livelihood that was given to them. Their dedication in taking care of their fish sanctuary and discipline in handling their income has brought them this abundance,” Leo N. Yumo, Natural Resources Management Officer of the National Project Coordination Office revealed.

BFMPA also helps their neighbors by selling bangus at an affordable price. After their harvest last September 11, some of their neighbors were eager to buy from them. This is more convenient instead of travelling to the town market which is six km away from their barangay.

Ma. Christina Minguel, one of the fish peddlers in Brgy. Bolusao, also shared how the association helps their community. “This is the season when our community are so excited every time BFMPA harvests their bangus. We buy them for around Php 150.00 and sell them for Php 160.00 to the nearby barangays. It is cheaper from the 180 to 200 pesos per kilo in the market,” she said.

BFMPA looks forward that they can harvest more and more each tranche and soon to have expansion of their sanctuary. For now, they continue to man their fish sanctuary 24 hours a day, with two members on duty for a 12-hour shift. This is to safeguard and make sure that the bangus are fed on time. (Jennina June Leira L. Brosas, RPCO 8)