The Brgy. Concepcion to Brgy. Hampangan, Hilongos, Leyte farm-to-market road is lauded by the World Bank and the Department of Agriculture's Philippine Rural Development as the first ever outstanding project all over the country under PRDP. It has a positive 40% variance, and was completed four months ahead of schedule.

In a span of eight months of construction, three barangays are now enjoying the 9.66-kilometer concreted farm-to-market road in Brgy. Concepcion to Brgy. Hampangan in Hilongos, Leyte, after years of enduring the difficulty in transporting their farm products.

This was lauded as the first ever outstanding project all over the country under the Department of Agriculture’s Philippine Rural Development Project (DA-PRDP) for having a positive 40% variance, and was completed four months ahead of the schedule.

Hon. Albert Villahermosa, Hilongos local chief executive, openly shared the factors in fast-tracking the project so farmers in the said barangays can benefit from the FMR the soonest time possible.

“It is a fruit of unity, hardwork, and commitment from the different stakeholders which included the local government unit staffs, the implementing agency which is the Department of Agriculture through PRDP, and the World Bank. We at the local government of Hilongos dedicated ourselves despite our daily responsibilities at work to make this happen. This is a collaborative effort and this makes this Concreting of Brgy. Concepcion-Bagumbayan-Hampangan FMR Project to what it is now,” he said. 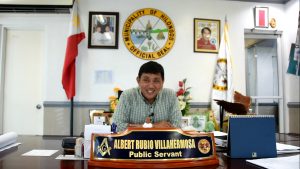 “We have long been wanting this road to be rehabilitated. We believed that this is one of the major concerns of our municipality, and concreting this road will mitigate societal problems in some of our barangays,” said Mayor Albert Villahermosa.

Villahermosa emphasized the support that the LGU has provided. He revealed that every employee had their contribution from the planning stage up to the implementation.

“The performance of the team was a little of everything. If there is a need for overtime, they work overtime. If the weather condition is good, then it would be good to do double time. This project was an additional load for them, so we always have to motivate them to cooperate and be flexible with various instructions. Good thing that they were open and actively shared a part,” he shared.

Looking back, Mayor Villahermosa acknowledged the lack of resources on hand. In the absence of personnel, the LGU hired consultants for technical assistance. With the lack of local funds, they went the extra mile and shelved from their own pocket to supply the needs for the ongoing construction.

Engr. Levi Mendros, Municipal Planning and Development Coordinator, shared that as early as the preparation stage, strategies have already been formulated.

Mendros closely monitored the activities on site. As head of the team, he regularly checked and made sure that things were properly implemented, and concerns were addressed immediately.

“It was not an easy road after all. Of course, there were challenges. However, we addressed issues right then and there. We don’t let any problem pass a day without solving it,” he revealed.

Above all the measures they applied, Mayor Villahermosa claimed that everything was made possible because of their strong faith that the FMR project will be successful, with the intention that this will help a lot of farmers in their livelihood.

“We have long been wanting this road to be rehabilitated. We believed that this is one of the major concerns of our municipality, and concreting this road will mitigate societal problems in some of our barangays,” he said.

The concreting of Brgy. Concepcion-Bagumbayan-Hampangan will also benefit farmers coming from 21 more barangays of the said town. This will also address the security and health concerns of the communities wherein responses can now reach in a 40-minute travel time instead of an hour and half that they experienced before it was constructed. (Jennina June Leira Brosas, RPCO 8)