Project affected persons for Concreting of San Antonio-Balocon FMR in Titay in posterity pose with DA-PRDP and MLGU staff after having received payment of affected trees and crops. (Photo by RPCO 9)

Social and Environmental Safeguards (SES) Unit Head Roger O. Bagaforo of Regional Project Coordination Office (RPCO IX) recently reported to PRDP Project Support Office, Mindanao Cluster that the municipal local government units (MLGUs) of Sibuco (Zamboaga del Norte), Buug and Titay (both in Zamboanga Sibugay) have paid just compensation to PAPs according to the number and type  of trees, crops and structures within the Road Right of Way (RRW) of farm-to-market road to be concreted by DA-PRDP.

A total of 80 PAPs received just compensation from their respective LGUs with a combined total amount of P697,087.00.  MLGU Sibuco paid the highest at P467,675 to 49 PAPs whose properties will be traversed by the 16.52 kilometer FMR from barangays Poblacion, Santo Niño (Sitio Log Deck) and Tangarak.  Buug MLGU released P180,020 to 19 PAPs with properties within the RRW of 3.42 kilometer FMR concreting from Barangay Talamimi to Agutayan. MLGU Titay disbursed a total of P49,392 for only 12 PAPs of 3.06 kilometer, according to Engr. Bagaforo.

The SES chief disclosed that the top management of DA-PRDP lauded MLGUs of Sibuco, Buug and Titay as compliant to the World Bank’s requirement for prompt payment to PAPs to expedite acquisition of right-of-way thereby ensuring smooth implementation of the project.  He cited that “just compensation” is mandated by Republic Act No. 10752 adhering to the Constitution stating “that private property shall not be taken for public use without just compensation”. This undertaking is one SES requirement set by PRDP prior to the issuance of No Objection Letter No. 2 (NOL 2) that gives the “green” light to begin the infrastructure subproject. 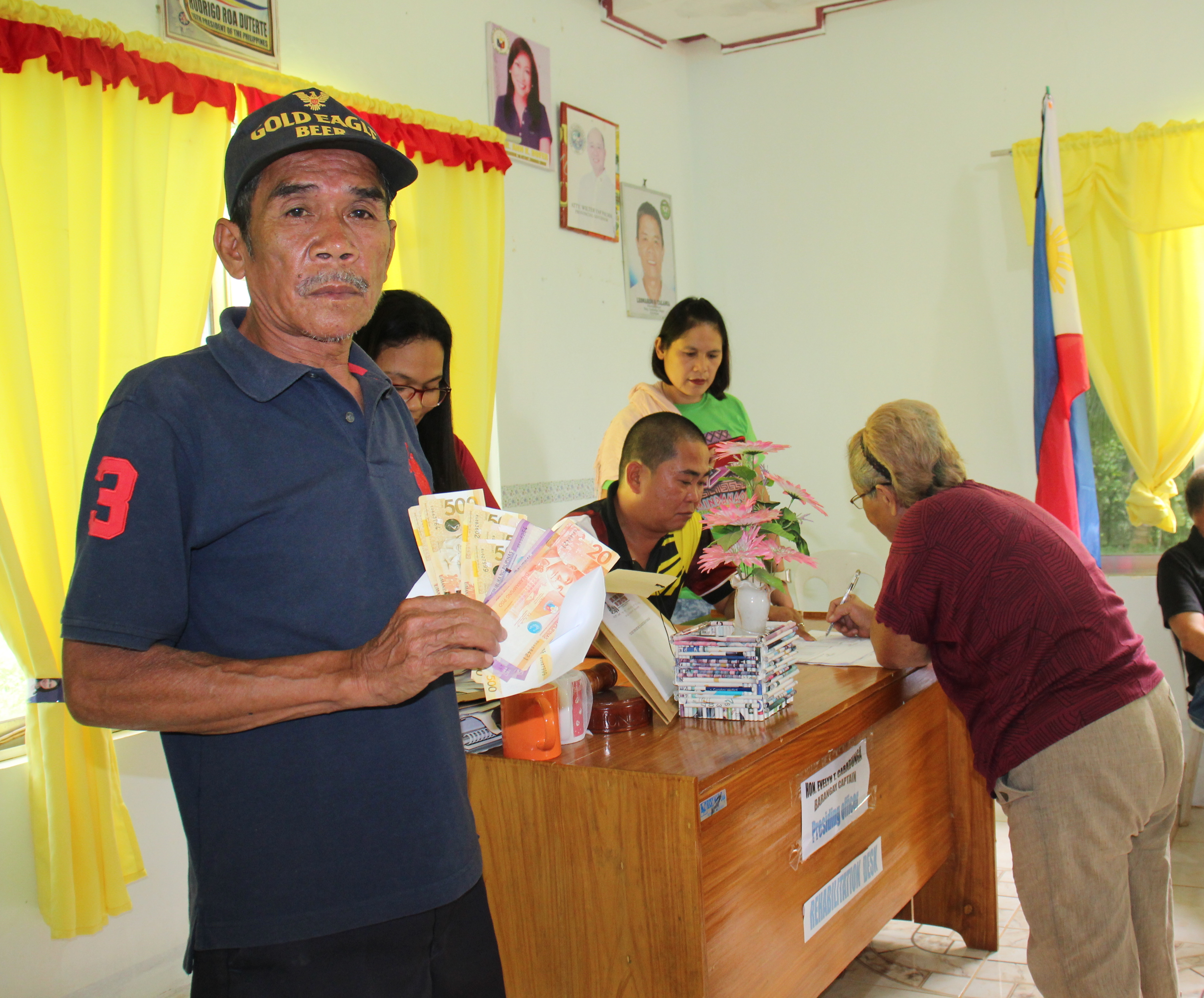 Titay project affected person Larry Labao shows off received cash payment from MLGU Titay as his marang and mango trees to be removed from the acquired road right-of-way for San Antonio – Balocon FMR concreting under DA-PRDP. (Photo by RPCO9)

Buug Vice Mayor Jonam Lagas, thanked his constituents, especially the lumads in the area for supporting the project who personally cut down the affected trees after being paid by the LGU.

Tangarak Barangay Captain Efraim Arcilla of Sibuco received P1,200 as just compensation for the two coconut trees within the RRW traversed by the 16.52 km FMR.  He is one of the many residents who are excited to receive the soon to be concreted project.

Titay farmer Larry Labao, on the other hand, received P5,370 for the three marang trees and one mango tree grown within the RRW of the 3.06 km San Antonio-Balocon FMR.  He was among the 12 recipients who, at first didn’t expect to receive payment for his affected trees so he was thankful to the MLGU Titay through Mayor Leonardo Talania.  As of this writing, Titay has received NOL 2 dated Oct. 14, 2019 with the implementation following after conducting the pre-construction conference. (Remai Alejado/ RPCO 9)