The World Bank and PRDP Team visit the Tinaguban Farmers Association for the Banana Production and Trading Enterprise in Carigara, Leyte. World Bank Regional Director Mr. Benoit Bosquet acknowledges the "level of enthusiasm and involvement of the proponent groups." 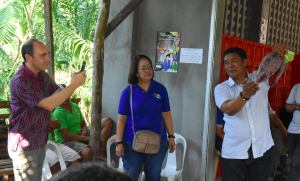 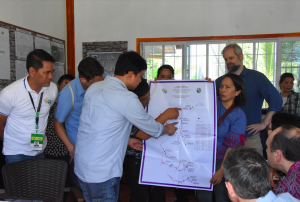 Local chief executive Mayor Albert Villahermosa expressed his gratitude to the World Bank and the whole PRDP team for the collaborative efforts they bestowed on Hilongos. He also took the time to present to the team their planned proposal of a Hilongos Barangay Water Supply Development Project.

A team from the World Bank wrapped up its recent visit to Eastern Visayas to undertake field visits to the Department of Agriculture’s Philippine Rural Development Project’s (DA-PRDP) ongoing and/completed subprojects. Leading the team was World Bank Regional Director Mr. Benoit Bosquet. Other delegates from the World Bank were also in attendance, including World Bank Task Team Leader to PRDP Mr. Eli Weiss.

The team travelled to Hilongos, Leyte for the Concreting of Conception – Bagumbayan – Hampangan Farm-to-Market Road amounting to 128 million pesos.

While conducting a run-through of the whole stretch of the project, the team from the World Bank wanted to see up close the rolls of geonet used as a slope protection procured by the local government of Hilongos to another PRDP I-REAP subproject, Southern Leyte Geotextile Production and Marketing in Brgy. Catmon, St. Bernard, S. Leyte.

The use of geonet as slope protection highlights the inter-relationship between the I-BUILD and I-REAP subprojects in the area.

The LGU of Hilongos was recognized by the PRDP during the 8th World Bank Implementation Support Mission for its accomplishment of completing the 9.66 kilometer FMR in a span of 8 months.
This was lauded as the first ever outstanding project across the country under the DA-PRDP for having a positive 40% variance, and was completed four months ahead of the schedule.

Local chief executive Mayor Albert Villahermosa expressed his gratitude to the World Bank and the whole PRDP team for the collaborative efforts they bestowed on Hilongos. He also took the time to present to the team their planned proposal of a Hilongos Barangay Water Supply Development Project. According to Mayor Villahermosa, the current charge of water is at 30 pesos per cubic meter. Should the project push through, the charge will be reduced to 8 pesos per cubic meter. The potable water system (PWS) is envisioned to reach thirteen barangays, mostly areas near the town proper. Initial estimate of the PWS is at 110 million pesos but is subject to change.

For the I-REAP, the team visited the Banana Production and Trading Enterprise in Carigara, Leyte amounting to P13 million pesos.

Here, the proponent group held a short presentation regarding their enterprise’s profile, sustainability plan and sociio-economic impact, among others.

Some of the queries thrown at them were about the problems they encountered in dealing with the enterprise.
The proponent group, led by their president, narrated how they deal with “bugto.” According to them, it is a virus carried by an insect which attacks the flower of the banana. The PG conducted a demonstration regarding the technology they practice. They wrap the flower with a sack and a straw string – after fifteen days, they return and remove the cover.

They are amenable that bananas can be easily topped down when faced with a bad weather. When an impending storm is pronounced, the PGs removes the leaves, leaving just the fruit and the stalk. They also practice intercropping of coconuts, which is planted in between bananas.

They also narrated that from 2013, they were into coconut planting. However, when typhoon “Yolanda” came, everything was wiped out. Thankfully, there were bananas. It served as an additional income back then. Now, bananas have become their main source of income.

When asked about his assessment for the visits, Mr. Bosquet said “we are very pleased to see our initial support, together with the government of the Philippines, is producing great outcomes.”

He also acknowledged the participation of the beneficiaries/proponent groups in the subproject implementation. “What’s nice is the level of enthusiasm and involvement of the proponent groups.”

In conclusion, Mr. Bosquet reiterated that “PRDP is not just a typical project funded by international development assistance. It is being mainstreamed and really adapted by the DA and that ensures the sustainability for the long term.”