Women play an important role in the field of agriculture especially in enterprise development and business aspects of farming.

The Bacayawan Women Rural Improvement Club (BWRIC) is composed of 106 women seaweed farmer members who are now implementing a subproject on Seaweed Production and Marketing Enterprise worth P3.60 million.

This association aims to improve the life of each household by bringing additional income to their families.

BWRIC, which is led by Laielyn L. Lomucso, had its humble beginnings in 2006. During those years, they focused on livestock dispersal, after which they decided to shift into seaweeds farming.

Lomucso grew up in a family of seaweeds farmers. As a child, she learned to appreciate the hard work of her parents and she believed that there is money to be made from seaweeds that can help elevate their lives from poverty.

“We want to do more than just planting and harvesting seaweeds,” said Lomucso. “We want to improve our capacity so we can also expand to bigger markets and explore bigger opportunities. I believe that seaweeds have so much potential. In fact, many children of farmers here became professionals because of seaweeds farming.” 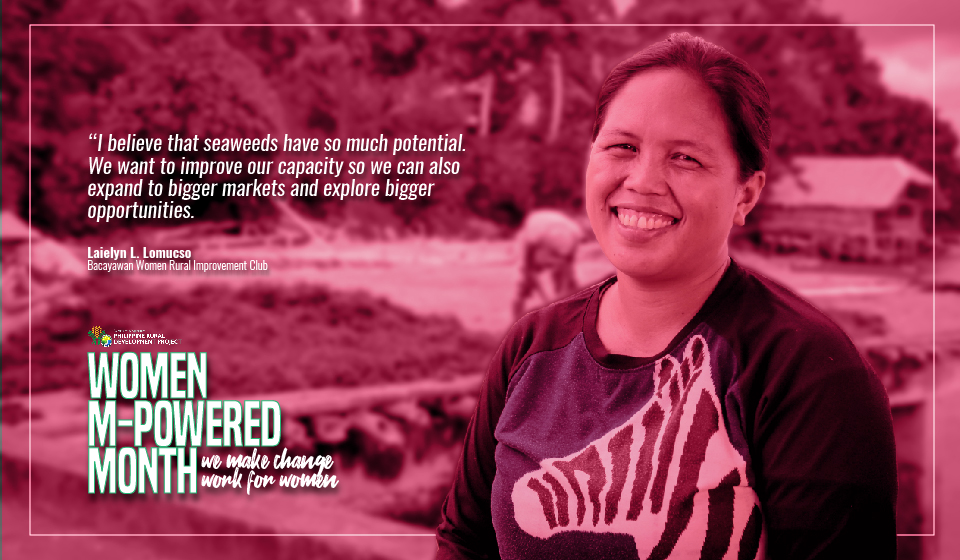 By availing of the support from the Department of Agriculture-Philippine Rural Development Project (DA-PRDP), they acquired additional funds for the expansion of their production area. The P3.60 million loan was used to purchase an initial 106,000 kilograms of seaweed seedlings that were distributed to all its members along with additional planting materials and equipment.

With the assistance from DA-PRDP, the production area is projected to increase to 10.6 hectares with the assumption that each farmer will receive farm inputs for a 10-line of seaweeds occupying 1,000 sq.m. or a total difference of 7.42 hectares from the existing production area.

To date, the women of BWRIC are about to complete the subproject with an accomplishment rate of 80.38%.

The post-harvest facilities of PAMANA, which they received a few years ago from BFAR, played an important role to this proponent group as it was of great value to the operation of the seaweed production and marketing enterprise during harvesting and drying period of the seaweeds.

The association was included among the Top 10 Associations in 2015 for their active participation and involvement in various community development activities in Dimataling. They also won in the Malinis at Masaganang Karagatan (MMK) where they received P1 million pesos—an award that recognized their best practices as to cleaning, and maintaining their coastal areas which is also beneficial for their seaweeds.

BWRIC is one example of how women can become active contributors to and claimholders of development. (Joy Montecalvo)