Manuel Carba, CALABARZON M&E Specialist, presents to the Oriental Mindoro PLGU the initial result of the five-day VCA assessment in the province.

The updating of VCAs primarily aims to identify how each commodity is being supported by PRDP, what are its situational gaps, and how these gaps should be addressed so that the local government units (LGUs) will be able to implement more appropriate interventions that will maximize the productivity of the farmers and fisherfolk.

The VCA is a scientific tool developed by the PRDP to help and guide the LGUs in preparing commodity investment plans for their top agricultural commodities.

Revalidation of VCAs in CALABARZON

To ensure that the information incorporated in the VCAs of the four commodities in the CALABARZON region is still appropriate for their industries, the PRDP Regional Project Coordination Office (RPCO) CALABARZON Local and National Level Planning (I-PLAN) component met with the commodity stakeholders to validate the updated VCAs on September 24-25, 2019 in Antipolo City.

“We need to revalidate if all previous VCAs are still applicable in the industry or maybe there are already changes in the direction of their competitiveness,” RPCO CALABARZON I-PLAN Component Head, Crystal Jade Padonan, said.

The commodities included in the activity were coffee, banana, mango, and pineapple. The VCAs of these commodities have been approved in 2016 which are valid for three years.

The validation focused on the commodities’ production data per province, cost and return analysis, and constraints and interventions included in the VCA.

Dubbed as the King of Calamansi, Oriental Mindoro remains to be the largest contributor of fresh calamansi fruit among the other provinces in MIMAROPA, making the region as the top producer in the country.

The assessment involved the gathering of primary data from different parts of Oriental Mindoro through focus group discussions with members of farmer cooperatives and associations, key informant interviews with concerned officials from attached national agencies and the provincial government, and household surveys with farmers, traders, and processors of calamansi.

The year 2014 marked the start of PRDP’s implementation of its pilot subprojects in MIMAROPA in Oriental Mindoro, with one enterprise and two infrastructure subprojects. Since then, the number of PRDP subprojects increased throughout the provinces of the region.

Five years into the PRDP implementation, the question now is whether the Project’s interventions have indeed created an impact on the improvement of its target commodities.

The response to this question vary from each interviewee to another, but it is exactly what the Project needs – to have an objective and credible source of information on how changes in each segment of the value chain, in this case of the calamansi industry, affects its players. The benefits and how they are distributed among recipients and other members of the community are important to be determined.

The PRDP RPCO-Bicol I-PLAN component aligns its VCAs to the directives of the new Department of Agriculture Secretary, William Dar, to attain increased productivity and income of farmers.

The I-PLAN team conducted a mobile meeting with the Provincial Project Management Implementing Unit heads and representatives from the six provinces of Bicol to identify and refocus on the priority interventions indicated in the Provincial Commodity Investment Plan (PCIP) that can possibly strengthen the links in the commodity value chain.

As of the moment, the VCAs that need updating are seaweeds for the national VCA; geonets, abaca and pili for provincial VCA; sweet potato, pineapple, cassava, cocosap sugar, mangrove crab, live goat and cocoshell charcoal for the regional VCA; and swine for the cluster VCA.

I-PLAN Bicol team will continue conducting a series of convergence meetings to strengthen the partnership between the government agencies and to provide support to the PLGU in implementing their PCIPs. ### (Lea Caliuag, DA-PRDP South Luzon PSO InfoACE Unit) 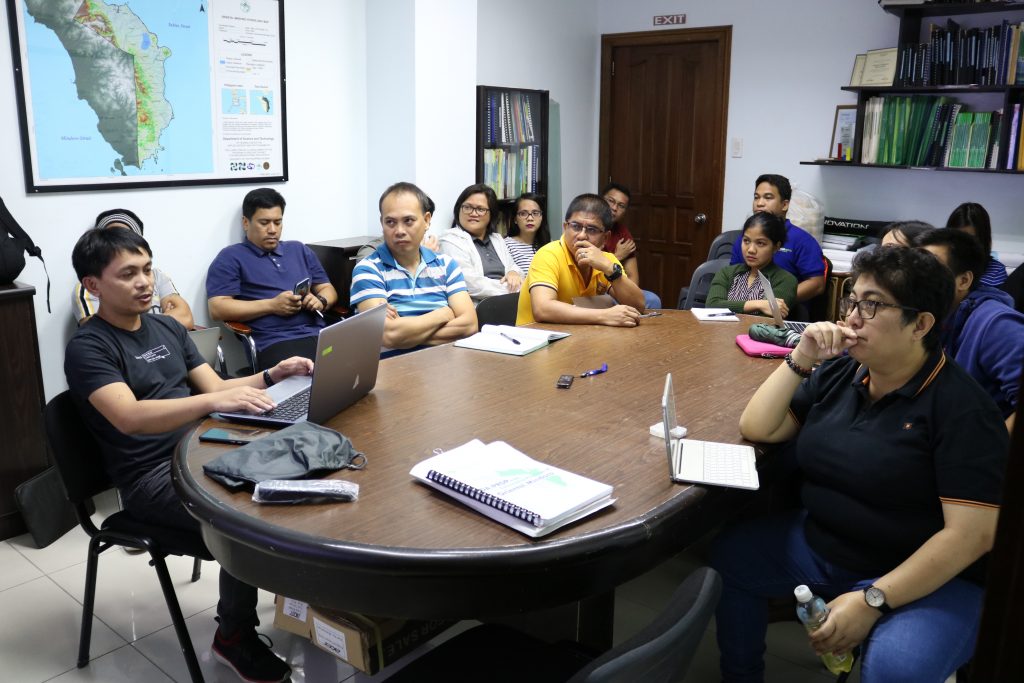 Manuel Carba, CALABARZON M&E Specialist, presents to the Oriental Mindoro PLGU the initial result of the five-day VCA assessment in the province.