drone shot of the 9.76 kilometers FMR that traverses the farm areas in Sitio Pedregoza . (Photo by RPCO12)

KORONADAL CITY- Farmers in Barangay Punong Grande in Banga, South Cotabato are now enjoying a significant change in their way of living after the concreting of an almost ten kilometer farm-to-market (FMR) road.

The Concreting of Junction National Highway – Sitio Pedregoza FMR, which exactly spans 9.76 kilometers, benefits farm families in the said barangay and its nearby communities which have more than 4,400 households.

Clarito Silagan, 70, of Purok Pag-asa, Punong Grande noted that their lives, especially in farming, were improved because of the reduction in the cost of transporting their produce to the market.

“Before, we were paying P50.00 per bag (of rice or corn) in order to deliver our products to the town, but with the concreting of our road, we are now only paying P20.00 per bag,” Silagan noted. 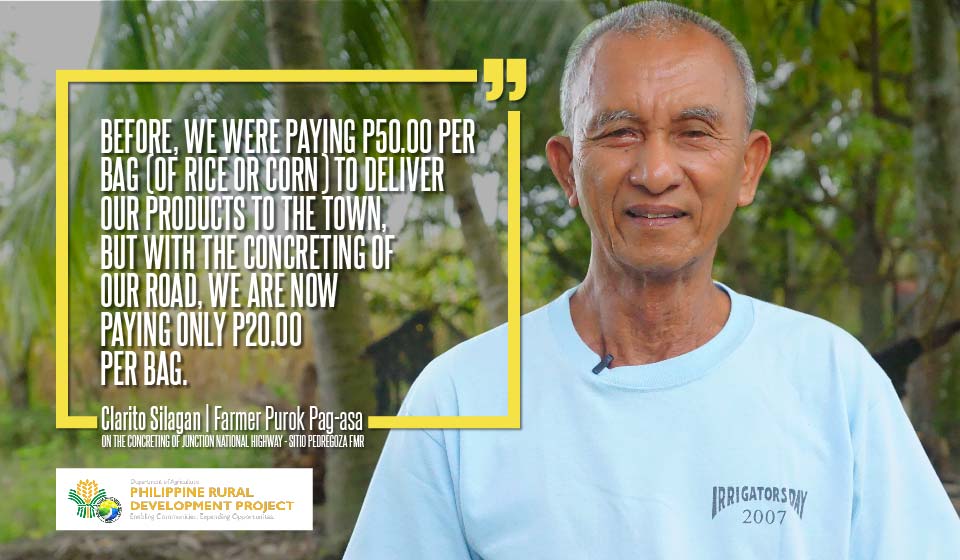 He added that the thirty peso-per bag saving brought by the FMR is a big help relief for them.

“We augmented the savings to our production expenses, like those intended for fertilizer,” the farmer said.

Farmers in Purok Pag-asa also saved 20 minutes in travel time. Before, they were traveling for almost 30 minutes, but now, in less than ten minutes, they can already reach the town.

The muddy condition of the road before hampered the farmers delivering fresh produce to the market.  Silagan, who is also a farmer leader in the area, shared that the FMR opens new opportunities for their association.

Some of the members of the Pagbun-ag Irrigators’ Association, which Silagan heads, decided to cultivate their once idle lands because of seen benefits after the concreting of the road.

Improved harvest were also felt from the members’ rice production area of 200 Hectares.

Punong Barangay Bobby Delalamon of the said barangay further proved the positive impact of the road and that its benefits cover all aspect of life in the community.

“Our barangay peace action force is now swiftly responding to incidents of trouble in the barangay,” Delalamon noted.

He added that the local government unit of Banga are now also easily moving the logistics in extending medical services since the completion of the concreting.

“We thank the Philippine Rural Development Project for the easy road network built here in our barangay… many lives were really changed,” the official said. #(CARL ULYSSESAGUILLON/DA)