The Concreting of Bukang Liwayway to Makandring Farm-to-Market Road (FMR) in Puerto Princesa City is one of the already completed subprojects of the Philippine Rural Development Project (PRDP) under the Department of Agriculture (DA). Covering up to 8 kilometers, the FMR is primarily located in Barangay Langogan where the top agricultural commodity is cashew.

While students, local residents, farmers, and traders from said barangay continue to benefit from the infrastructure, it is the Rural Improvement Club (RIC) in Langogan that really took advantage of the newly concreted road.

The RIC was established in 2009. According to its President, Milagros Abrena, when the FMR finished construction in 2017, they still had their old office and processing area behind the old Langogan Barangay Hall. This was built only using local materials which was prone to easy damage especially during heavy rains. Even in any weather, it was not a very comfortable one to do processing and not as conducive in storing harvested cashew.

In 2019, the RIC was able to have a newly constructed building which now serves as their office, processing area, and store. This is a huge improvement from their previous one because they are now easily seen by people coming in and out of their barangay, whether local or tourists. Definitely, this is a big plus in the marketing of their products.

Abrena noted that the construction of the FMR helped her and her fellow members in improving the way the RIC operated and did business. One advantage, according to her, is the easier and more convenient way of transporting their products.

All members of the RIC have cashew plantations. These plantations, however, are not located in mere roadsides but in the mountainous areas of Langogan or across rivers far from their homes and actual processing area. This is why the construction of their main road was important for them.

“The fare in renting tricycles before is expensive because the road is rough. When it rains and the water rises, it is more difficult because vehicles cannot even enter. This is not the case anymore,” Abrena added.

While rentals of vehicles may seem to be a small percentage of their whole operation, it is still a relevant deduction in their operational cost.

The RIC markets their processed cashew products in Puerto Princesa, sometimes with the assistance of the city government when orders are in bulk. They normally sell roasted and fried cashew, but have now also started processing cashew brittle. – Leira Vic Colongon, DA-PRDP MIMAROPA RPCO InfoACE Unit 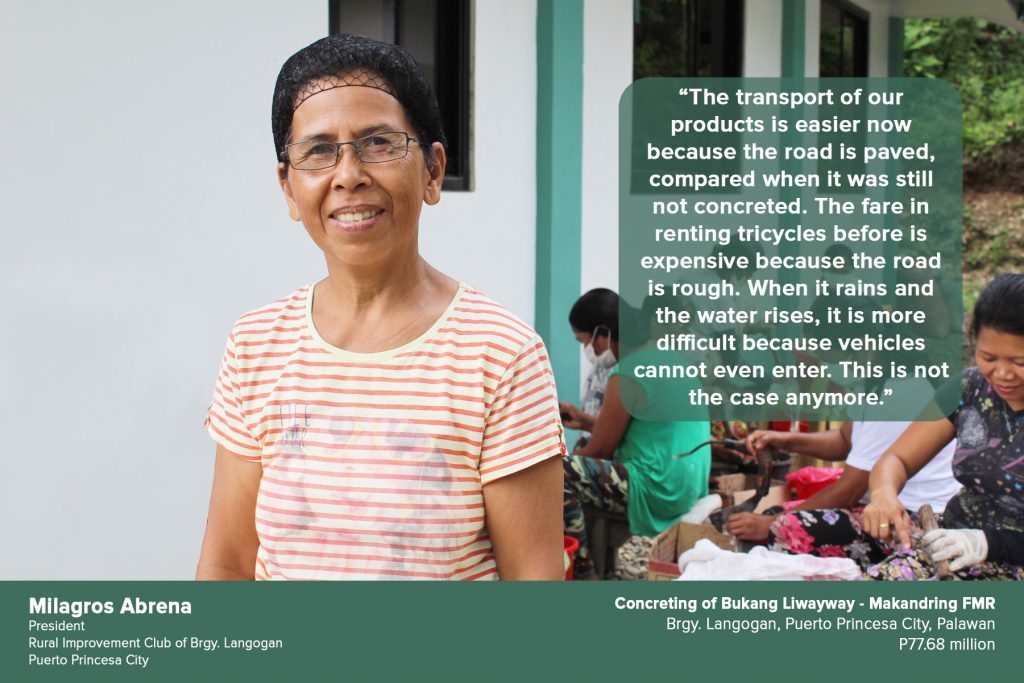