The 18.12-kilometer farm-to-market road (FMR) with 15 linear-meter bridge subproject under the Department of Agriculture’s Philippine Rural Development Project is almost set to bring better opportunities and access to basic necessities among the farmers and residents of two intersecting town of Maayon and Pontevedra in Capiz.

Recently, the Regional Project Coordination Office (RPCO) 6 team headed by Deputy Project Director Rene B. Famoso, together with the Provincial Project Management and Implementation Unit (PPMIU)-Capiz conducted the pre-final inspection of the Hipona-Canapian-Quinabonglan FMR with bridge which is redound as to advantage of some 35,000 residents with a total of 6,766 households that are mainly engaged in corn, coconut, sugarcane, rice, banana production and livestock and poultry raising. 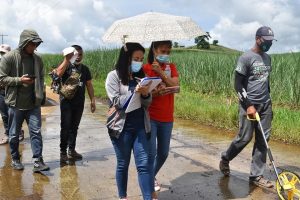 A composite team from the Provincial Project Management and Implementation Unit – Capiz and Regional Project Coordination Office – 6 conduct a pre-final inspection of the Hipona-Canapian-Quinabonglan farm-to-market road in Capiz.

This road is expected to give them better opportunities in transporting their agricultural products which can become their source of income most especially in times of this pandemic.

Meanwhile, Engr. Freddie Fernandez revealed the findings during the recently-concluded inspection.
“From the first to the end kilometers, we have noted down the cracks that are mostly seen in the constructed road. This will be used in creating a punchlist report which will be passed to the province and be handed down to the contractor, subject for them to make the rectifications.”

He also confirmed that the FMR is bound to be completed within this year and will be opened to the public upon completion.