An aerial shot of the Imbang Grande-Tagubong-Gemumua Agahon-Agtabo farm-to-market road.

Began in June 2015, the rehabilitation of Imbang Grande-Tagubong-Gemumua Agahon-Agtabo farm-to-market road is nearing completion at 71.83 percent as of August 2018. As early as now, residents are already experiencing several of the project’s emerging benefits.

(There were instances where we would miss the delivery of our produce to the markets because of the rough road – it was impassable for the vehicles.)

Because of the road, travel time going to the town proper have also been reduced.

(Before, reaching the town proper would usually take one to two hours. Now, in a span of 15 minutes, you have already reached your destination.)

The shorter travel time resulted in the decrease of losses of goods and produce that are transported from the farms to the markets. Residents who sell their produce noted that the losses from damage to the goods caused by hauling have significantly decreased.

The new road also opened opportunities for the government’s basic services to the residents. Medical and dental checkups have been frequent in the barangay in recent months.

Residents are very grateful for the road especially during rainy season when the road is tough to traverse. Now, travelling is made easier, especially for teachers and students in barangay elementary schools.

Retired teacher and now Barangay Kagawad Tessie Palmares said that “one of the major benefits the road brought was the significant impact in education. Attendance is no longer an issue to both teachers and students since access have been more convenient.” 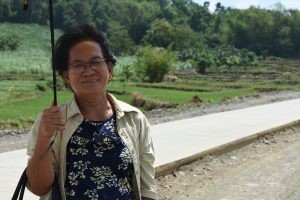 Retired teacher and now barangay kagawad Tessie Palmares notes the significant impact of the road in education. Attendance is no longer an issue for both teachers and students.

Because of the new road, most of the residents have bought motorcycles, which is the most common mode of transportation in the area. 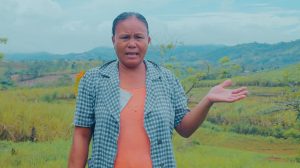 Lorna Busil of Brgy. Alimuno, Passi, observes that since the construction of the road, there is an increase in traffic count as more and more residents purchase motorcycles.

(Even if it’s raining, the jeepney that frequents the area can pass any time. It has also added another trip schedule, unlike before where in a one day, there would only be a trip as well. There was also a significant increase in vehicles, especially with residents owning a motorcycle.)

For the residents living in the stretch of Imbang Grande to Agtabo, the P257,800,000.01-worth farm-to-market road project initiated through the Department of Agriculture’s Philippine Rural Development Project (DA-PRDP) is a dream come true. (September Noon A. Macahilo, PSO InfoACE)