Cordon, Isabela – The first PRDP-funded dam in Region 2 to be constructed ahead of schedule, Capirpiriwan Diversion Dam is now fully operational and PLGU Isabela has set a record of completing it without any negative slippage. Farmers said it is very beneficial to them, as they can now have two croppings every year without spending fuel for water pumps.

“The dam supplies us more than enough water for our ricefields. We have no problem now as to how water is distributed downstream. The dam also is significant to vegetable growers in Sitio Cama,” Ernesto Suelo, Irrigator’s Association President in Capirpiriwan, Cordon, Isabela said.

Engr. Homer de la Cruz, liaison officer of AHB Construction disclosed that construction of the PRDP- funded dam was finished one and a half months before the expiry date.

“The diversion dam was completed without negative slippage throughout its implementation,” de la Cruz said.

“We kept abreast of our schedule. We went ahead of our timelines and we were challenged by the requirements of the PRDP. Its personnel from the region and the staff from the province were always here to guide us. They were always on call,” he concluded.

The diversion dam is located in Barangay Capirpiriwan, Cordon, Isabela. It is bounded on the north by Dir-an, Diffun, Quirino; on the east by Villa Florentino, Nueva Vizcaya; on the west by Barangay Laurel; and on the south by Barangay Magsaysay.

The direct service area of the subproject is located in the southern portion of Cordon. Its topography is characterized by hills, undulating and rolling lands. The site is rich with springs and creeks that drain into the Diadi River. The water source of the dam is Cama Creek.

“It is now easier to control and direct water to a larger irrigation service area. Before, distribution was a source of misunderstanding among us. There were times a farmer needs water, but those upstream do not yield. There were times he wanted to stop the flow to his farm, but he cannot control it. Now, it is easy because we have outlets that we can open and close,” Mr. Rosendo Cayaban said.

“The diversion dam is very significant to us, farmers. We are now assured of a continuous supply of water year-round. The farmers downstream don’t complain anymore. The water can reach them anytime. Aside from water, the dam has given us peace. And the peace of mind.” he said.

Thirty-five (35) hectares of ricefields are within the service area of Capirpiriwan Dam. Farmers in Purok Rusod revealed that some cornfields were converted as rice areas because of the dam. (Dr. Ferdinand N. Cortez, RPCO2 InfoACE) 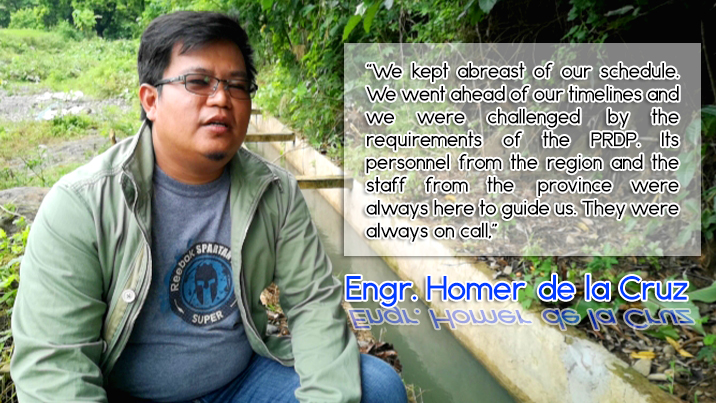